NEW YORK  Al Qaeda confirmed Friday that Osama Bin Laden was killed in Sunday's raid on his hideout in Pakistan and the terrorist network threatened the U.S. with retaliation, according to reports.  In this image released by the White House and digitally altered by the source to diffuse the paper in front of Secretary of State Hillary Rodham Clinton, President Barack Obama and Vice President Joe Biden, along with members of the national security team, receive an update on the mission against Osama Bin Laden in the White House on Sunday

"We stress that the blood of the holy warrior sheik, Osama Bin Laden, God bless him, is precious to us and to all Muslims and will not go in vain," a statement posted on militant web sites on May 3 said, The Associated Press reported. "We will remain, God willing, a curse chasing the Americans and their agents, following them outside and inside their countries."

"Soon, God willing, their happiness will turn to sadness," the statement continued, "their blood will be mingled with their tears."

The statement, posted on Web sites on which the group usually puts out its messages, was signed by "the general leadership" of al Qaeda.

"We don't trot out this stuff as trophies," Obama said in an interview on CBS' "60 Minutes.' "That's not who we are," Obama said.

The leader of al Qaeda and the mastermind of the Sept. 11, 2001, terrorist attacks was killed in a U.S. military operation in a compound in Abbottabad, Pakistan, about 40 miles outside the capital of Islamabad, on Sunday.

As more details about the raid emerges, the Obama administration continues to debate how much information it should make public.

Meanwhile, John Brennan, the U.S. counterterrorism chief, said the government is reviewing the materials that were gathered from the compound in which Osama Bin Laden was killed on Sunday.

U.S. Navy SEALS were able to collect a large amount of hardware from the compound, including 10 hard drives, five computers and more than 100 storage devices.

Investigators hope the hard drives will contain key information about the al Qaeda network and help them to prevent future terrorist attacks.

Click through the following photo slideshow to learn more about the U.S. operation that killed Bin Laden, and the global reactions to his death.

A crowd outside the White House in Washington cheers Sunday, May 1, upon hearing the news that terrorist leader Osama Bin Laden was dead.

CNN) -- From Morocco to the foothills of the Himalayas, the call for revenge echoes across the internet.

Pakistan and the people and interests of the United States. The Pakistani Taliban, in a show of solidarity, 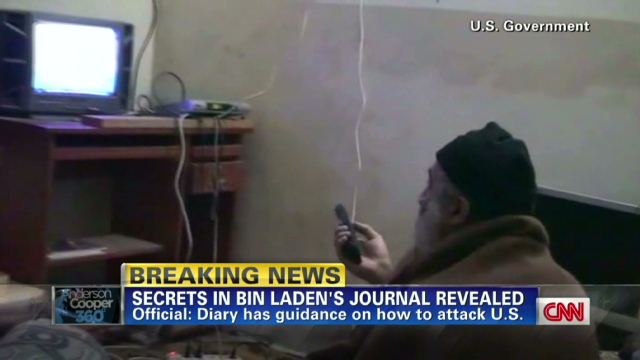 Faisal Shahzad' s attempt to explode a car bomb in New York's Times Square a year ago is the most obvious recent example of such an attack. That's the foremost concern of the FBI and Department of Homeland Security, which issued a bulletin to law enforcement saying bin Laden's death "is likely to provide motivation for Homeland attacks, particularly from like-minded, ideologically focused lone offenders.

as Najibullah Zazi, Bryant Neal Vinas and others. Similarly, cells in Europe have been broken up  especially in Belgium, Germany, Spain and Denmark.

The last major attack attributed to al Qaeda sympathizers was the London subway bombings in 2005.  Qaeda had discussed derailing trains in the U.S. Such a modest objective compared to the 9/11 attacks may be an acknowledgment of the group's tougher surroundings and a sign that al Qaeda is moving toward attacks focused on causing maximum disruption and economic cost.