Nancy Reagan to be buried beside husband at presidential library CLICK

"On the other hand, neither did she confine herself to the domestic sphere. And by taking an active role in her husband's business, she helped to reconcile conservatism to the reality of women's changing roles. Her views may have been conservative, but her political involvement implied that it wasn't improper for women to participate in what conservatives considered the man's sphere."

From a letter written from President Bush to Barbara on December 12, 1943, when they became publicly engaged:

"I love you, precious, with all my heart and to know that you love me means my life. How often I have thought of the immeasurable joy that will be ours some day...."

"Barbara and I mourn the passing of one of the greatest believers in freedom we have had the privilege to know. As President, I watched in wonder as Nelson Mandela had the remarkable capacity to forgive his jailers following 26 years of wrongful imprisonment -- setting a powerful example of redemption and grace for us all. He was a man of tremendous moral courage, who changed the course of history in his country. Barbara and I had great respect for President Mandela, and send our condolences to his family and countrymen."

We can never repay our veterans for all that they have endured for our sake, but we can show by our actions -- on this day and every day of the year -- that their great sacrifices are indeed cherished and remembered.

President George Bush
Proclamation 6345 -- Veterans Day, 1991
1991-10-03
We can never repay our veterans for all that they have endured for our sake, but we can show by our actions -- on this day and every day of the year -- that their great sacrifices are indeed cherished and remembered.

I Pledge Allegiance To The Flag

Of The United States of America

And To The Republic For Which It Stands

One Nation Under GOD Indivisible

With Liberty and Justice For All

“Old Glory is hallowed by the blood of the innocent righteously shed on the battle fields of history, making right the power of might. A Nation without end. Amen.

DEVOTION TO THE HOLY FACE OF JESUS

From Wikipedia, the free encyclopedia

America's woman suffrage movement was founded in the mid 19th century by women who had become politically active through their work in the abolitionist and temperance movements. In July 1848, 200 woman suffragists, organized by Elizabeth Cady Stanton and Lucretia Mott, met in Seneca Falls, New York, to discuss women's rights. After approving measures asserting the right of women to educational and employment opportunities, they passed a resolution that declared "it is the duty of the women of this country to secure to themselves their sacred right to the elective franchise." For proclaiming a women's right to vote, the Seneca Falls Convention was subjected to public ridicule, and some backers of women's rights withdrew their support. However, the resolution marked the beginning of the woman suffrage movement in America.

The first national woman's rights convention was held in 1850 and then repeated annually, providing an important focus for the growing woman suffrage movement. In the Reconstruction era, the 15th Amendment to the U.S. Constitution was adopted, granting African American men the right to vote, but Congress declined to expand enfranchisement into the sphere of gender. In 1869, the National Woman Suffrage Association was founded by Susan B. Anthony and Elizabeth Cady Stanton to push for a woman suffrage amendment to the U.S. Constitution. Another organization, the American Woman Suffrage Association, led by Lucy Stone, was formed in the same year to work through the state legislatures. In 1890, these two groups were united as the National American Woman Suffrage Association. That year, Wyoming became the first state to grant women the right to vote.

By the beginning of the 20th century, the role of women in American society was changing drastically: Women were working more, receiving a better education, bearing fewer children, and three more states (Colorado, Utah, and Idaho) had yielded to the demand for female enfranchisement. In 1916, the National Woman's Party (formed in 1913 at the Congressional Union for Woman Suffrage) decided to adopt a more radical approach to woman suffrage. Instead of questionnaires and lobbying, its members picketed the White House, marched, and staged acts of civil disobedience.

In 1917, America entered World War I, and women aided the war effort in various capacities that helped break down most of the remaining opposition to woman suffrage. By 1918, women had acquired equal suffrage with men in 15 states, and both the Democratic and Republican parties openly endorsed female enfranchisement. 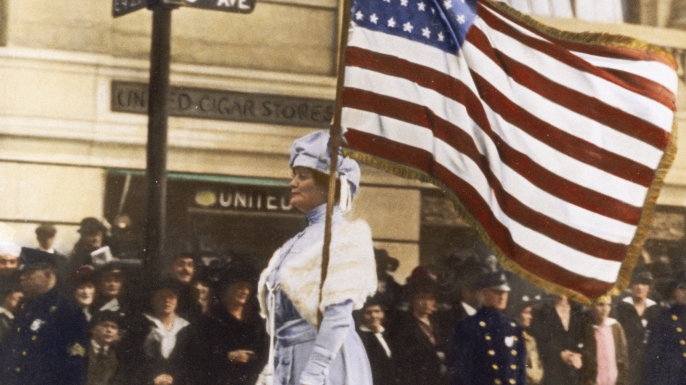 The Mother Who Saved Suffrage: Passing the 19th Amendment

On August 18, 1920, Tennessee passed the proposed 19th Amendment to the U.S. Constitution by a one-vote margin, becoming the 36th state to ratify the measure and clearing the way for its official adoption eight days later. Incredibly, women’s suffrage in the United States ultimately hinged on an 11th-hour change of heart by a young state legislator with a very powerful mother.

American suffragist Alice Paul (1885-1977) was born into a prominent Quaker family in New Jersey. While attending a training school in England, she became active with the country’s radical suffragists. After two years with the National American Woman Suffrage Association (NAWSA), she cofounded the Congressional Union and then formed the National Woman’s party in 1916. Drawing on her experience, Paul led demonstrations and was subjected to imprisonment as she sought a voting amendment, but her actions helped bring about the passage of the 19th Amendment in 1920. Paul continued to push for equal rights and worked from National Woman’s party headquarters in Washington, D.C., until her later years.

Women's suffragists parade in New York City in 1917, carrying placards with signatures of more than a million women.

The Whig Party was a political party active in the early 19th century in the United States of America. Four Presidents of the United States were members of the Whig Party. Considered integral to the Second Party System and operating from the early 1830s to the mid-1850s, the party was formed in opposition to the policies of President Andrew Jackson and his Democratic Party. In particular, the Whigs supported the supremacy of Congress over the Presidency and favored a program of modernization and economic protectionism. This name was chosen to echo the American Whigs of 1776, who fought for independence, and because "Whig" was then a widely recognized label of choice for people who identified as opposing tyranny. The Whig Party counted among its members such national political luminaries as Daniel Webster, William Henry Harrison, and their preeminent leader, Henry Clay of Kentucky. In addition to Harrison, the Whig Party also nominated war hero generals Zachary Taylor and Winfield Scott.

In its two decades of existence, the Whig Party had two of its candidates, William Henry Harrison and Zachary Taylor, elected President. Both died in office. John Tyler succeeded to the Presidency after Harrison's death, but was expelled from the party. Millard Fillmore, who became President after Taylor's death, was the last Whig to hold the nation's highest office.

SUPPORTED BY THE  U.S. WHIG PARTY

The 19th Amendment, guaranteeing women the right to vote, is formally adopted into the U.S. Constitution by proclamation of Secretary of State Bainbridge Colby. The amendment was the culmination of more than 70 years of struggle by woman suffragists. Its two sections read simply: "The right of citizens of the United States to vote shall not be denied or abridged by the United States or by any State on account of sex" and "Congress shall have power to enforce this article by appropriate legislation."

In January 1918, the woman suffrage amendment passed the House of Representatives with the necessary two-thirds majority vote. In June 1919, it was approved by the Senate and sent to the states for ratification. Campaigns were waged by suffragists around the country to secure ratification, and on August 18, 1920, Tennessee became the 36th state to ratify the amendment, giving it the two-thirds majority of state ratification necessary to make it the law of the land.

The package containing the certified record of the action of the Tennessee legislature was sent by train to the nation's capital, arriving in the early hours of August 26. At 8 a.m. that morning, Secretary of State Bainbridge Colby signed it without ceremony at his residence in Washington. None of the leaders of the woman suffrage movement were present when the proclamation was signed, and no photographers or film cameras recorded the event. That afternoon, Carrie Chapman Catt, head of the National American Suffrage Association, was received at the White House by President Woodrow Wilson and Edith Wilson, the first lady.

I PLEDGE ALLEGIANCE TO THE FLAG
OF THE UNITED STATES OF AMERICA
AND TO THE REPUBLIC FOR WHICH IT STANDS
ONE NATION UNDER GOD, INDIVISIBLE
WITH LIBERTY AND JUSTICE FOR ALL
"OLD GLORY IS HALLOWED BY THE BLOOD OF THE INNOCENT
RIGHTEOUSLY  SHED ON THE BATTLE FIELDS OF HISTORY
MAKING RIGHT THE POWER OF MIGHT
NATION WITHOUT END, AMEN"
WRITTEN BY JOAN STOYKOVICH NELSON©